We were eating like kings. Well, kings of a small, isolated fishing village at least. When provisioning in Cape Town, I intentionally bought less meat than usual, anticipating heavy fishing along this 1700 mile stretch of ocean, notorious for calm seas. Fortunately, the fishing gods cooperated with my strategy, to the chagrin of our fuel supply.

We motored continuously from the 4th to 7th days, leaving us 400 miles out with a quarter tank of fuel. That may not sound like much fuel, and it isn’t. It was a problem we needed to address, but that is beyond the scope of this article. Motoring slowly, however, was great for fishing.

The first day of motoring, my dad went off watch to sleep and I deployed a pink and white rubber squid lure. I watched it grow smaller in our wake and was excited with anticipation since we had not fished since Cocos Keeling a couple months ago. An hour later, the drag screamed, less loudly than usual, but I knew I still had a fish. I put the boat in neutral, then after several seconds, reverse to stop our momentum. The drag stopped running and I was worried the fish threw the hook. However, after a couple turns of the reel, the fish surged again. It was a quick fight, with my reel overpowering the small fish. I pulled it into the cockpit without the gaff, and quickly ended its struggle with a precise club to the head.

The fish was my favorite kind, a Mahi Mahi, with beautiful green and blue scales blending together. It was only our second Mahi Mahi of the trip, with the first being a four foot monster in Tonga. As beautiful as they are, the meat is the true prize. It is white, flakey, tender, and delicious. I efficiently fileted it and cleaned the mess, and when my dad woke up for his watch, I smiled and said “For dinner tonight, the fish of the day is fresh caught Mahi Mahi.” He slept through the whole fish processing operation, and was equally thrilled about our improved diet. 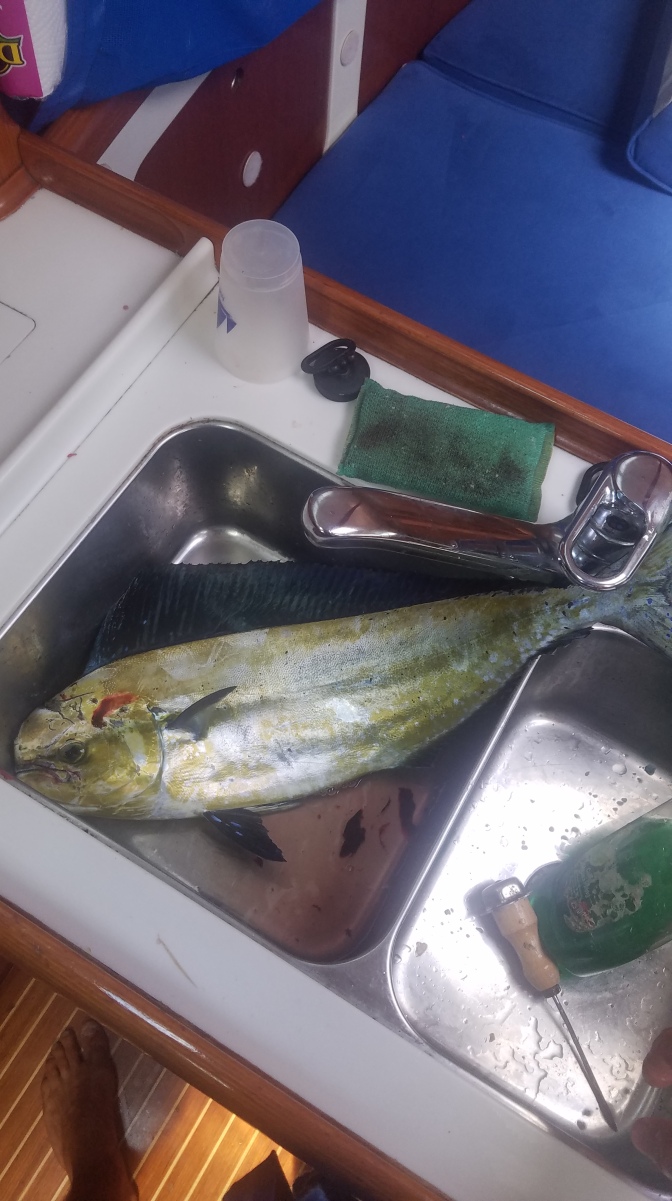 One of the Mahi.

I drizzled olive oil over it, and sprinkled dried herbs on top of that, before poaching it. It was good, but not my best effort. Fortunately, the luck continued, giving me more opportunities to try new preparation techniques.

Over the next four days, I caught four more Mahi. I threw one back because it was too small, and the biggest one was 28 inches, so they were good for one or two meals. I perfected pan frying them, prepping them by tossing the rinsed and dried filets in flour mixed with Old Bay and blackened seasoning, then dunking the lightly coated fish in beaten egg, and finally rolling the filet in bread crumbs. I then dropped the filets into a large saucepan with a layer of oil and pan fried them until golden brown, then flipped them to brown the other side. This, undoubtedly has been the tastiest fish we have prepared the entire trip (and if you find Mahi or a similar fish in the grocery store, try it!).

One Mahi was a little on the small side and had beautiful yellow eyes, but the boys needed to eat, even though I felt bad killing it for only a lunch portion. I think the ocean was testing me, and I failed. Later that day, I apologized to the sea, but that night, as I sat reading my Kindle during the graveyard shift, I felt a strong impact on my chest. It felt like someone punched me and I cried out in surprise. I turned on my flashlight to look around and a five inch flying fish lay next to me, equally as surprised to run into someone way out there at such an hour. I grabbed it by the tail and returned it to the water, optimistic that that act of kindness evened my score with Neptune. It did not, as we were unsuccessful fishing the next 12 hours.

Fortunately, that was as long as the punishment lasted, and the following two days were phenomenal for fishing, so we returned to his good graces, which my dad detailed in his post, Two Oceans Down, One to Go.. We did not know when we would arrive at Saint Helena and were going to have to sail again soon or surely exhaust the fuel supply, but we had plenty of water, and kept replenishing our meat, so we were happy, although bored, fishermen.

Finance trained cubicle warrior turned yachtie, took a year and a half off to sail around the world with my father before starting a real estate investment company www.buyhousesbr.com. View all posts by Travis Steinemann

One thought on “Mahi Monday”